Rice is easily one of the most consumed foods in the world. It’s a great source of food that fills you up in a hurry.

You’ll get a lot of nourishment and satisfaction out of eating rice. It’s naturally low sodium and cholesterol content allows rice to be consumed as part of a daily diet without any health concerns at all.

Rice is a food that can be used for dozens upon dozens of recipes. If you feel like having it by itself, it’s great like that too. The versatility of rice should never be overlooked.

Did you realize there are multiple types of rice? There are plenty of varieties of rice out there. If you didn’t know there was a world outside of white rice then you need to expand your horizons since some rice serves a different purpose as others.

Because we are lovers of the ketogenic diet we really don’t mess with rice that much but that doesn’t mean you still can’t enjoy it and all of its wild types.

13 Rice Types You Should Know About

Below you’ll find out about 13 different types of rice. They are going to be used for all types of recipes.

Some types of rice are interchangeable with recipes but other recipes call for a specific type of rice. Why is this? Well, some rice has different properties that are going to allow it to absorb liquids differently. The taste of some rice is going to work much better with some types of foods than others.

Some rice has vitamins and minerals that other rice isn’t going to have as well.

No, don’t expect to see rice pudding on this list either.

It’s time to explore some different types of rice so that you can see how you can expand your pallet to something beyond your typical, everyday rice.

Arborio is Italian short-grain rice. This type of rice is different because it has a black dot in the middle of its grains.

When it comes to cooking, this type of rice is mainly used for risotto. Arborio is going to absorb liquids and flavors when you are cooking it slowly.

Because of this, it’s going to allow risottos to have that creamy, soft taste with every bite.

This rice holds its shape well throughout any cooking process so it’s also great when you are trying to make something similar to a fried rice ball as well.

If you want to try some arborio rice, look here. 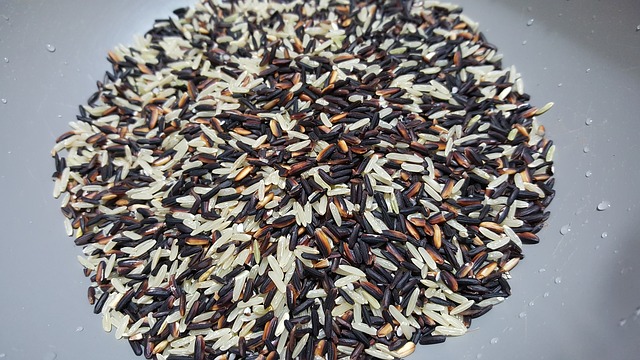 This type of rice is actually considered a grass. It is grown in wetlands near lakes and rivers and was originally based near the Great Lakes region of the US.

The rice is unique in that when you cook it, the grains reveal a white interior and curl themselves up.

By doing this, the rice gives itself a texture and flavor that is unlike any other rice on this list.

Basmati rice is mainly found in India and Pakistan.

This long-grain rice has a very distinct flavor that comes from its aging process. It’s aged for about a year after it gets harvested.

Because of where it’s typically found in, this rice goes best with any type of curry so that you can get all the natural aromas of the rice to be heightened.

Even if you’ve never had basmati rice before, you’re going to know what it is if you happen to smell it for the first time. It’s a different type of rice when the smell hits your nose but when it touches your taste buds, you’re going to enjoy it.

If you’re looking to try some basmati rice look here. 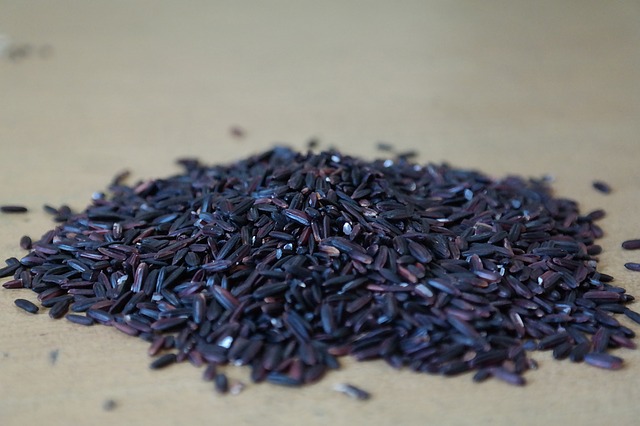 That’s right, black rice. It’s exactly what you think it is.

This rice gets its color from having high levels of anthocyanin, which is the antioxidant found in blueberries.

Because of its high content of anthocyanin, eating this rice is going to allow your body’s immune system to be boosted.

Although this is a rice that is typically found in Asian cuisine, it can be incorporated into many other dishes. You’ll be able to enjoy this rice by itself on occasion. No other additives are needed to make this rice special.

This type of rice is one that was originally from Thailand.

It’s a long-grain type of rice that cooks slow. When it’s finally done cooking it’s going to become slightly sticky. Because of this, it’s a popular choice for a lot of Asian dishes and even dishes in the Caribbean.

If you’re a fan of Jamaican food, you’ve probably had Jasmine rice with jerk chicken or a spicy curry dish.

Jasmine rice could be rice that you’ve had very frequently when you choose to eat rice since it’s one of the popular types of white rice that is used around the world.

I’m sure most of you have heard of brown rice before. It’s usually associated with the “healthier” rice when compared to your average white rice.

Brown rice can be used as a substitute for any recipes that call for white rice.

You get brown rice by removing the outer husk of a piece of rice and keeping the bran layer. This bran layer is full of nutrients, hence why it’s looked at as the “healthier” type of rice.

Rosematta rice is medium grain rice that is grown in India.

It’s full of nutrients and has a very earthy flavor to it. This is unlike most other types of rice.

If you happen to eat this rice by itself, you’ll feel as though something is missing from it. This will taste like rice that shouldn’t be eaten by itself.

If you’re looking to get the most out of Rosematta rice, then you should pair it with some sort of meat. 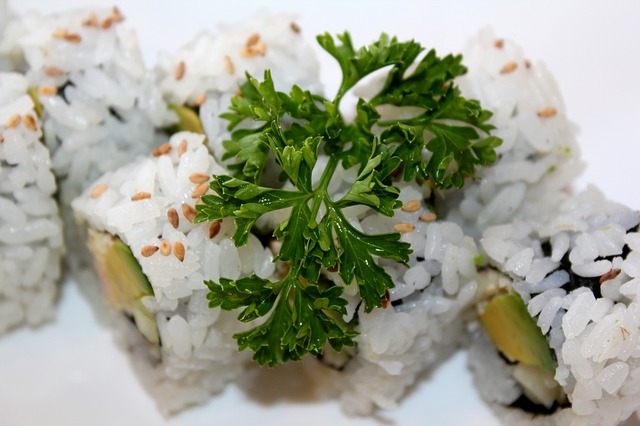 Sushi rice is a short-grain, Japanese rice that’s used primarily in, you guessed it, sushi. It’s similar to sticky rice in that it’s very sticky, which makes it perfect for all types of sushi rolls.

If you aren’t that much in the mood for sushi, then this rice can be used just like normal white rice. Yes, you’ll have that bit of stickiness to it, but not enough to the point where you’re going to be turned off by it.

This type of rice is traditionally found in Thailand.

Like brown rice, it has been milled to remove the outer husk and retain its layer of bran.

This is what gives the rice its color. It’ll either be a reddish or brown color.

When you remove the outer husk, you’re going to make this rice much more nutritious than other types of rice.

Although it’s going to take a little bit longer to cook than other types of rice, it’s always worth it. You’ll get a bit chewier texture but when you combine it with the ride foods, everything is going to blend together so well.

The way this rice is processed allows the grain absorbs all nutrients possible before it’s removed and ready to cook.

However, this processing also causes the rice to be less sticky than the other types of rice, particularly white rice.

You may not always want that sticky type of rice, though, which makes this perfect.

The way this rice absorbs liquids makes it great for dishes that have thick liquids like curry. It can make something go from a soup to a normal meal that isn’t as much like a soup.

Sticky rice is a type of rice that is very popular in sweet dishes.

If you’ve ever been to an Asian restaurant and have seen sticky rice on the menu, it’s probably listed under the rest of the desserts.

It’s very high in starch, which is why it becomes so sticky when it’s cooked.

If you’ve ever had an amazing paella, then Valencia rice was probably used in it.

This type of rice is ideal for dishes like paella because it can be very absorbent.

So, it acts like arborio and parboiled rice when it’s combined with a dish that has a lot of liquid.

Sometimes you need an element in a dish that’s going to act as a buffer. That’s what Valencia rice does. In paella, it acts as a buffer for the liquid causing the dish to be ideal. It’s not going to have too much liquid, but it’s not going to be so little that’s it seems like a dry meal. 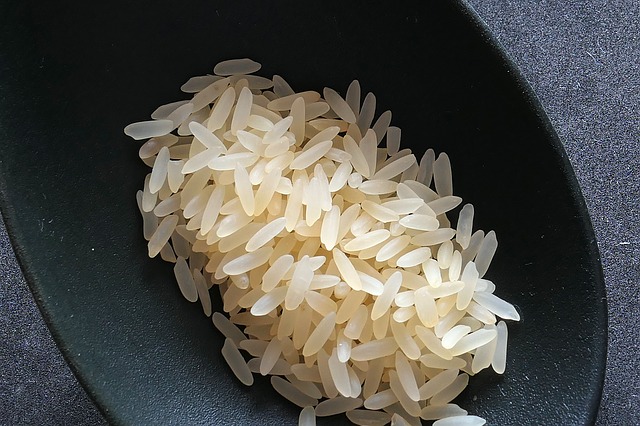 Here we are, the most common type of rice that Americans are familiar with.

White rice is simple long-grain rice that may be the most versatile of all the types of rice.

The way it’s processed causes the grains to lose a lot of its nutritional value compared to that of rice like brown rice.

Even though it lacks some nutritional value, it’s simplicity makes it so popular. It’s not difficult to cook and can be used with almost any dish you can think.

If you’re looking for a low carb option when it comes to rice, you should look at cauliflower rice. It’s just cauliflower that has been broken down to resemble something that is similar to rice.

Cauliflower is a low carb vegetable that anybody looking to eat a little healthier should incorporate into their diet.

When cooked properly, you’re going to get something that is very similar to regular white rice. It can be used for nearly all kinds of dishes.

If you aren’t sure how to rice cauliflower, all you need is a food processor. Or you could probably find a bag of it at your local grocery store.

Rice for Any Occasion

As you can see, there is a type of rice for almost any occasion. No two types of rice are the same. Some may have similar properties, but they are all different.

All rice cooks differently as well. My advice would be to have an excellent rice cooker if you’re thinking about trying different types of rice. This is a rice cooker that we like to use.

After you finish cooking the rice, my advice would be to pair it with some delicious low carb vegetables.

Rice is great for all types of meals. Even if you feel as though a dish doesn’t call for rice, you could find a type of rice to fit it.